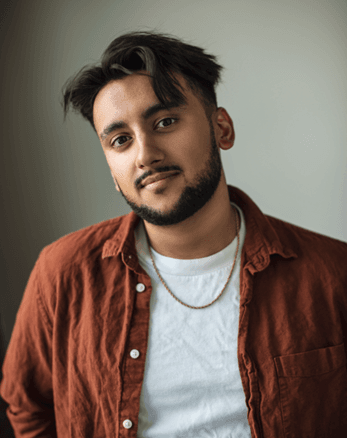 Dhruv Iyengar (he/him) is a South Asian American, born and raised in the suburbs of Chicago, before relocating to Plano in 2014 after a brief 3-year stint in Chennai, India. He’s a Plano East Senior High School alum and spent some time at Ithaca College, heading towards a BFA in Acting with minors in English and History. However, after reconsideration, he decided to move to England to resume his undergraduate studies, graduating this year from the prestigious London Academy of Music and Dramatic Art with first-class honors. He spent his final year as the student body president of the LAMDA community, representing the student voice, and meeting with creatives such as Benedict Cumberbatch, Joe Russo, and Rory Kinnear (among others).

Dhruv began his professional acting career in 2017, appearing as Rodrigo in the Junior Players/Shakespeare Dallas production of Othello, and was most recently seen in Guards at the Taj at Stage West, in Fort Worth. Dhruv is incredibly passionate about the mission that Junior Players strives to uphold— and believes that without opportunity, there isn’t a chance for representation. Through the support of Junior Players, and having been one himself, he hopes to give kids the freedom of choice, a community where opportunities are boundless, and a future that’s filled with creativity, passion, and joy.